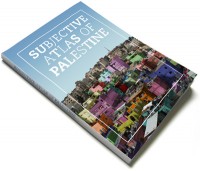 The Cover of Subjective Atlas of Palestine

The trauma, the losing of the homeland in 1948, losing the vital space, the landscape, the
way of living, the potential of maintaining freedom of choice, and becoming -as Slavoj Z?iz?ek says- always in a state of emergency, where the possibility of thinking and living in the present becomes impossible.

This project is a re-production of space by using its architectural elements -that maintain the trauma- to create a space that produces the possibility for hope (hope in this sense is the ability to imagine a better future, to think of unessential events to happen, and mainly to be able to be sarcastic of the present).

Here I’m dealing with Al-Amari Refugee camp, located inside/beside/outside Ramallah city. The form of the camp doesn’t represent its economical status but rather represents its loss and trauma as a political manifestation by the continuous production of the ephemeral structures, ways of living and relation with the surround.

Changing the refugee camp’s colours is a symbolic act to fill the loss -like a child filling a coloring book- and produce the possibility of hope. Here I’m attempting to appropriate an urban landscape that reminds us of the tragedy -of their existence and our disappearance- in order to subvert memory into a desired future.

The work has been exhibited in various exhibitions (among others)

It has also been published in different publications (among others)
Contemporary Art: World Currents (edited by: Terry Smith, Publisher: Pearson/Prentice Hall)
Subjective Atlas of Palestine (Edited and designed by Annelys de Vet, 010 publishers, 2007)