52 *Robbery in Area A : yazan khalili

based on police report, one of the thieves' narrative, and photos of the city... this is a story about a bank robbery that happened in Ramallah few years ago.. and how the thieves read the geopolitical condition to be able to get away with the robbery...

Video Installation consists of 3 videos. Dealing with a bank robbery that happened in Ramallah, a city in the Occupied Palestinian Territories, which became part of Area A section after Oslo Accords agreement in 1993.

The project tries to expose and investigate the geopolitics that the thieves read and used to make this robbery. How the peace agreement which divided the West Bank into Areas A, B, and C, also allowed for a new economy to emerge and establish itself on banking systems, loans, and neo-liberal struc- tures. How both situations created a need for a theft and resistance, how robbing a bank in Area A can be read as both.

the video installation looks at bank facades in the city, gazes at them, monitors them, tries to recreate the scenes the thief looked at when in the process of preparing for the robbery, through this gaze, we also gaze at the city, at the places for the potential robbery, the coming one, the awaited for. The thief tells us about the plan, the confused position between resistance and theft, confuses us, and makes us wonder about our position.

This project, although it brings Ramallah as a space for its action, but it questions the global city, the city that is copied everywhere in this world.

The first iteration of the work was a poster published with Portal 9, Edition #3
to check it out, click here 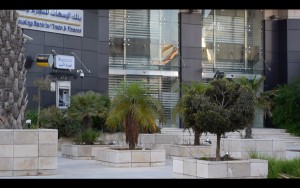 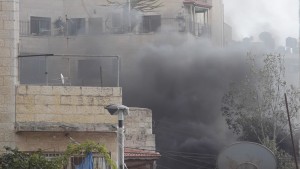 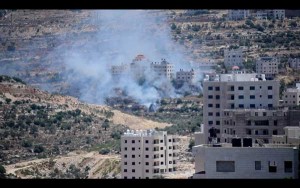